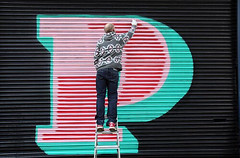 Originally uploaded by Bomb It – The Movie

“Flynn, who works under the pseudonym Ben Eine, has not enjoyed so much as a minor retrospective anywhere. Until now he was not even among the four bestselling artists from Sussex at the Brighton gallery that represents him. Last night Flynn, 39, told The Times that his “pretty mad” walk-on part in the special relationship began when the phone rang a week ago. “I got a phone call from No 10 saying David Cameron is a fan of my work,” he said. It was news to him. These days he operates within the law, amid the burgeoning street art scene that has made Banksy one of today’s most famous contemporary artists.” [2] 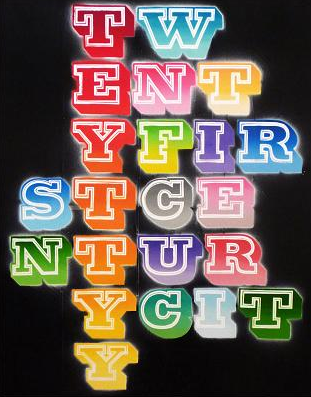 Eine last came to the media’s attention when he persuaded the shopkeepers of Middlesex Street in Spitalfields to allow him to paint the entire alphabet, in his trademark vibrant, cheerful colours, on their closed security shutters. Elsewhere in London, his letters spell out whole words – “Exciting” or “Scary” or “Vandalism” – on walls and buildings, or just stand on their own: a solitary “e” or “a” adorning a shopfront or telecomm box. There’s a Googlemap of his London work, but similar typographical totems can also be seen in Tokyo, New York, Los Angeles and Paris, as well as Newcastle and Hastings, where he now lives.” [The Guardian]

Below is the work, Twenty First Century City