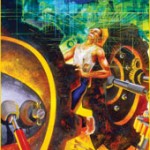 Mear One is one of the legendary figures of LA graffiti culture. For nearly two decades he has challenged the audience to destroy normality and question authority. Graffiti has evolved into a political purpose for Mear One and his work often makes audiences uncomfortable. He is most recently known for the “Be the Revolution” project, in which he teamed up with Shepard Fairey and Robbie Conal.

Together they placed more than 1,500 politically charged posters around Los Angeles, “kicking the political-street-art scene into overdrive.” Mear One believes that if there is no dialogue, then the painting has lost its purpose and only serves those who can afford to mix art and leisure. Instead, he creates art that serves the people.

Growing up poor in Hollywood, being bused from one broken neighborhood to another, shaped Mear One’s vision allowing him to witness a wide range of graffiti and urban murals. The public nature of graffiti immediately captivated him because it created a place where he found acceptance by rebelliously expressing himself, and he became a member of the infamous CBS (Can’t Be Stopped) Crew. Today his graffiti and fine art continues to illuminate his dissattification with big business, war for profit and injustice in society. His work is inspired by classic California/hot rod/surfer/rock ‘n’ roll culture, including artists Rick Griffin, Mouse and Kelley, and Robert Williams.