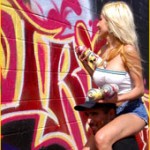 Raised in Los Angeles, Tribe was immersed in the culturally diverse mecca of underground graffiti artists and muralists from a very young age. Tribe began her artistic feats at the ripe age of 13. Eventually, the young adrenaline-seeking artist began endeavors that even her male counterparts would never attempt. Tribe would hang off of busy freeway overpasses, bombard moving busses, and climb the tallest billboards, all for the sake of her art.

Conquering yet another male dominated profession, she is one of the youngest, hottest female D.J.’s in the fierce Los Angeles nightclub scene. Most recently Fox news aired a story about her life and she hosts her own cable show about Latin hip hop in Los Angeles called L.A. Onda. She’s also been featured in national TV shows, major magazines, music videos and major motion pictures.

Check out this hardcore hottie’s music and pics at: www.djladytribe.com