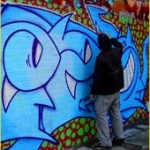 Pez began painting in 1999 and quickly became both well-known and prolific around his home city of Barcelona. At first he wrote the word “pez” (fish) in letters to form the shape of a fish. After bombing extensively with this combination of letters and form, Pez realized that he preferred the image to the letter as he could reach a wider audience, then simply graffiti writers who could read the graffiti code.

Somewhat influenced by other artists in Barcelona and the growing use of the icon there, he evolved into using only the image of a fish as his tag and in throw-ups. Pez always draws a smiling fish in order to obtain a smile from the public that sees his grining fish jumping around the cityscape. While you can spot his logo all over Barcelona as both tags and as larger aerosol paintings on walls, increasingly it is on the move to other Spanish cities such as Sevilla, Bilbao, and Tenerife. Pez is beginning to go global too, and we spotted his comical creature in Amsterdam and Berlin.

Pez has exhibited in European cities and is also featured in the books: Art of Rebellion, Street Logos, and Graffiti World.