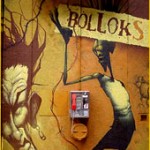 SHOK1 was born in England in 1970 and began writing furiously by ’84, having been influenced by New York graffiti styles. This self-taught artist has been getting up worldwide for over 20 years, and working professionally since ’93 with corporate peeps Guiness, Avant-Garde London agency St. Lukes, Tim Westwood and the Hell’s Angels. His aerosol credibility is legitimized by Molotow—the first spray paint brand designed for fine art—which named one of their Premium colors “SHOK1 Evil Olive,” helping to get up the SHOK1 signature color internationally.

SHOK1 has dabbled in the digital realm, and is co-founder and lead artist of cult music and culture magazine, Big Daddy. His work has also been featured in the best-selling Pictoplasma book, Trace Magazine, Lapiz and Graphotism, while two limited edition toys were released by US toy company Kid Robot in 2005.

Check ’em out at: www.shok1.com