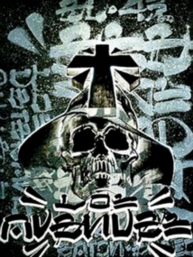 As a boy in the 1950’s Chaz Bojorquez experienced “placas”, the graffiti tradition of Mexican-Americans living in East Los Angeles. Dating back to at least the mid-1930’s, Placas (or plaques) were much like a role call, symbols of territorial street boundaries and pledges of allegiance to one’s neighborhood. Not a gang member himself, he started his career tagging in the L.A. riverbed. He is acknowledged as one of the first modern writers to take graffiti out of the ‘gang’ context and into a mural/art context.

A master calligrapher, he is world renowned for his development of the old English based font known as West Coast “Cholo” style writing. His zoot-suited skull icon, inspired by Mexican folk art and the Aztec tradition, is known as Senõr Suerte (Mr. Luck) and has been adopted by individuals as a gangster image of protection from death. His work has been exhibited throughout the world and hangs in top museums including the Smithsonian and The Los Angeles Museum of Art.

After more than decade of tagging in the streets in the 1970’s and early 1980’s he came to a deeper need to understand the motivations behind this modern art form. In 1979 he embarked on a 3 year round-the-world journey, visiting 35 countries to study how graphics and letters describe culture. This exploration led him to ask: Does graffiti art have intent, purpose, cultural identity, history and unity? Who owns the public space and who has the right to speak and be heard?