A local art organization, L.A. Art Machine, and three prominent California artists, Mear One, Chor Boogie, and Shark Toof, brought suit today in federal court against Anschutz Entertainment Group (AEG) and the Ritz-Carlton Residences at L.A. Live, owned by AEG, for destroying $100,000 of their artwork. The artwork had been loaned to AEG and the Ritz-Carlton Residences for a high-end promotional event at the luxury condos located at L.A. Live, but instead of being returned to the artists, the artwork was dismantled and discarded, according to Daniel Y. Zohar of Zohar Law Firm, P.C. in Los Angeles, who is representing the artists and the L.A. Art Machine. 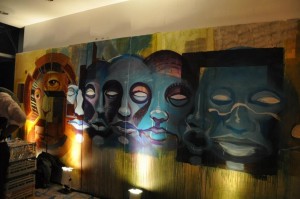 “What AEG did was in violation not only of my clients’ economic rights, but a violation of their moral rights as defined by federal and state law,” explained Mr. Zohar. The Visual Artists Rights Act (VARA) and the California Art Preservation Act (CAPA) protect the rights of artists and forbid the desecration, alteration or destruction of works of art.

“These renowned artists had agreed to show their artwork at the Ritz-Carlton Residences to help AEG attract affluent potential clientele to their vacant, multi-million dollar condos. Yet in return, their valuable art was coldly destroyed,” Mr. Zohar added.

The promotional event was held by AEG in conjunction with the 2011 Los Angeles Art Show. Part of the event was curated by Bryson Strauss, an internationally-recognized gallery and museum curator and director of the L.A. Art Machine, a community-based arts organization. Mr. Strauss was to supply fine artwork for the real estate marketing event on January 19, 2011, designed to attract potential buyers to the Ritz-Carlton Residences’ multi-million dollar penthouse suite, which remained unsold at the time. Mr. Strauss brought in several famed artists who provided their works for display at the event, including Shepard Fairey, creator of the Barack Obama “Hope” poster, and three critically-acclaimed street artists: Mear One, Chor Boogie and Shark Toof. Other featured artworks at the event were by legendary photojournalist Henri Cartier-Bresson, David LaChapelle, and Garret Suhrie. Following the successful party and the sale of Mr. Fairey’s works (which were then removed), AEG asked that Mear One, Chor Boogie and Shark Toof continue displaying their artwork because the penthouse would be shown to more potential buyers in the future. The artists agreed, but on condition that their multiple pieces of artwork eventually had to be returned, and had to be professionally de-installed under the supervision of L.A. Art Machine.

However, several months later, after Mr. Strauss and the artists had already made arrangements with AEG to retrieve the artwork, they were told that the artwork had been ordered removed by AEG and then disposed of as part of a routine cleanup.

“My clients were shocked by this admission and expected an apology, as well as payment for their artwork. AEG offered neither,” said Mr. Zohar. “Apparently they thought my clients lacked the resources and courage to take on such an influential and powerful business. They were wrong.”

All three of the street artists are highly regarded within the art world on both a national and international level. Mear One is well-known for his politically-themed works, city-wide mural installations, and featured album covers and clothing graphics for music artists such as Limp Bizkit and Guns N’ Roses. Chor Boogie has created murals in cities on five continents and painted portraits for Jay Z and Hugh Hefner, but may be best known for his mural painted on a portion of the Berlin Wall in 2010, valued at more than 500,000 Euros. Shark Toof’s works, known for his iconic wheatpaste of a hand drawn shark head, have been exhibited in galleries and museums throughout the United States including Portsmouth Museum of Art and currently at the Chinese American Museum.

“Corporate apathy toward art and artists is not that surprising,” said Mr. Strauss. “In this case, we all knew that Ritz-Carlton had commercial interests, but we initially took their excitement about this artwork, the artists, and the event as being genuine. However, it appears that when their 9 million dollar penthouse didn’t sell, corporate priorities shifted and they showed no real appreciation for the importance and value of these pieces. The loss of nearly 90 feet of murals by world-class artists is a tragedy. As a person who has committed his life to art and artists, I can’t get my head around the indifference.”