Now its sometimes rather grey in Scotland, for being on the British isles it tends toward the cloudy and rainy type of weather. But in Scotland, Kelburn Castle was given a bit (well alot) of colour a few years back by a Brazilian crew at the behest of the Boyle clan due to a fire which the castle in a sorry state.  Now officials from Historic Scotland are saying that they’ve had enough of colour and want to go back to the grey and traditional. To be honest its probably the most colourful thing Scotland has seen since, well…for a while, while proving to be quite the tourist attraction as it most likely the ONLY castle in Europe to boast such an array of colours ( so much so that it makes Joseph and His Magic Dreamcoat look dull)! What do you think? Should the castle remain colourful for a little while longer? Or should history take back its course? To be honest I’m a bit for both. Perhaps the laddies can see aye to aye (sorry for the play on words but it was just too good to pass up) 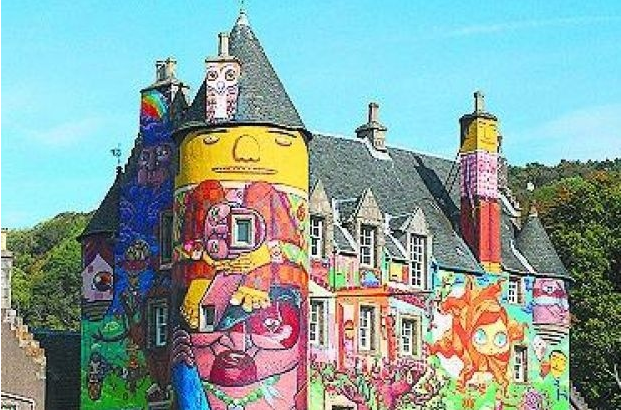 This entry was posted in Blog, Can Control Out of the Ordinary and tagged Boyle Clan, Graffiti, Historical Scotland, history, Keluburn Castle, Lord Glasgow, Scotland, United Kingdom. Bookmark the permalink.

One Response to Da Bomb: Scotland Seeing Some Colour!