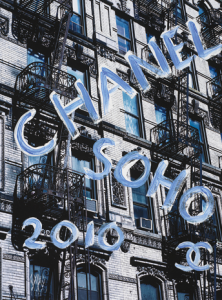 Picture this: some women go into the Chanel store in SoHo, NYC but rather than making a bee-line for the latest bag or jacket, they go for a black Chanel can of  spray paint;  walk over to what looks to be a glass wall inside the store and proceed to tag the letters CHANEL in bright colours. No this isn’t some graffiti fantasy of mine but, actually what went on recently at the new Chanel store in SoHo.  To be fair the cans of Chanel spray paint aren’t actually filled with paint but rather with infared paint –  invisible to the naked eye- and the wall was a porous “L” shaped LED canvas scaled at 10 feet high and 150 feet wide., which the “paint” then appeared on. Seamlessly embedded into the chamber that is created between the wall of light and the store facade was Beim’s graffiti installation.[1] 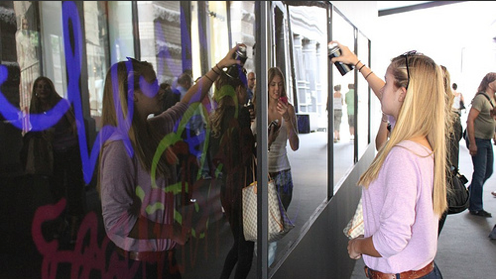 Karl Lagerfeld (head man who runs Chanel) has recently embarked on a graffiti campaign which included hiring Adam Biem, CEO of Tangiable Interaction based in Vancouver and Apologue, Inc to set up the installation. Tangiable has worked with the 2010 Olympic Games, a 17-concert tour with Green Day, and various jobs for Coldplay, the Blue Man Group, MSN, Hello Kitty, Bacardi, Nokia, Verizon and Heineken to name a few.[2] The company was started a mere four years ago and their list of clientele is majorly impressive, and now to boot they’ve just added Chanel. 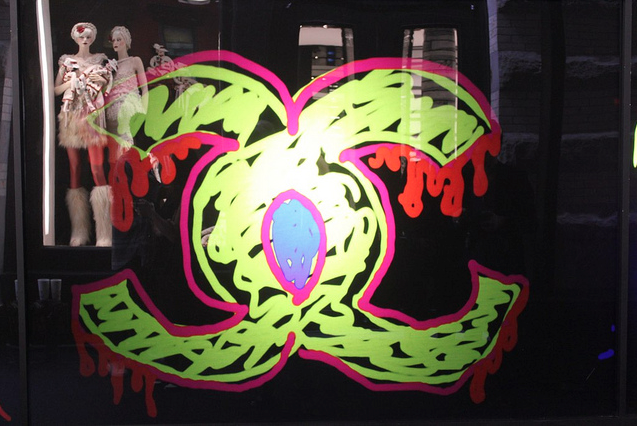 The opening was a three day bash with included celebs/fashionista’s from both UK and the US- including “the Kaiser” (Karl Lagerfeld) himself- to get their tagging on while participating on the usual partying activities. 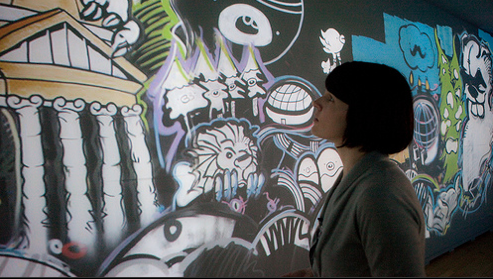 Graffiti Wall at the 2010 Vancouver Olympics 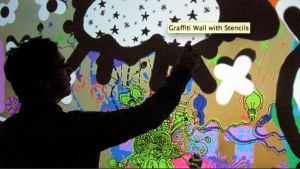 Here is a video of some work Tangible digital graff.

To Read More About the Chanel Opening: