Emblazoned on a long, tall, concrete barrier in the midst of a rocky Middle Eastern landscape is this spray-painted message: “Mirror, mirror on the wall. When will this senseless object fall?”

Messages of peace, marriage proposals and jokes are among the most popular graffiti requests.

It’s one of more than 900 graffiti messages that have been spray-painted by Palestinians on the controversial wall that separates Israel and the West Bank.

The painters take orders through a Web site that lets customers get a message on the wall. For the equivalent of $40, a Palestinian will spray paint the message and send three digital photos of it.

Anything goes — marriage proposals, jokes, notes to friends — as long as it isn’t extremist, hate-filled, or pornographic, said Faris Arouri, one of the founders of the site.

“Trying to imagine a clear view between Palestine and Israel,” one reads. 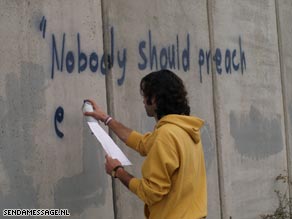