A SPECIAL SCREENING OF BOMB IT WILL RUN AT THE INSTITUTE OF CONTEMPORARY ART
Dates and times: TBD

Boston, MA – On the 20th anniversary of the Obey Giant campaign, the Institute of Contemporary Art/Boston opens the first museum survey of Shepard Fairey, the influential street artist who created the now iconic Obama poster. Stickers and posters of the artist’s work have appeared on street signs and buildings around the world as part of a guerrilla art campaign of global scale. Featuring over 80 works, Shepard Fairey: Supply & Demand traces the artist’s career over 20 years, from the Obey Giant stencil to screen prints of political revolutionaries and rock stars to recent mixed-media works and a new mural commissioned for the ICA show. In complement to the exhibition, Fairey will be creating public art works at sites around Boston. On view at the ICA from Feb. 6 to Aug. 16, 2009, Shepard Fairey: Supply & Demand is accompanied by an expanded, limited-edition box set of Supply & Demand, the retrospective publication of the artist’s work, in addition to exclusive limited-edition prints only available at the ICA Store.

Shepard Fairey: Supply and Demand features work in a wide variety of media – screen prints, stencils, stickers, rubylith illustrations, collages, and works on wood, metal and canvas. These works reflect the diversity of Fairey’s aesthetic, displaying a variety of influences and references such as Soviet propaganda, psychedelic rock posters, images of Americana, and the layering and weathering of street art. While his visually seductive imagery draws in his audience, Fairey uses his work as a platform to make statements on social issues important to him. The artist explains his driving motivation: “The real message behind most of my work is ‘question everything.” 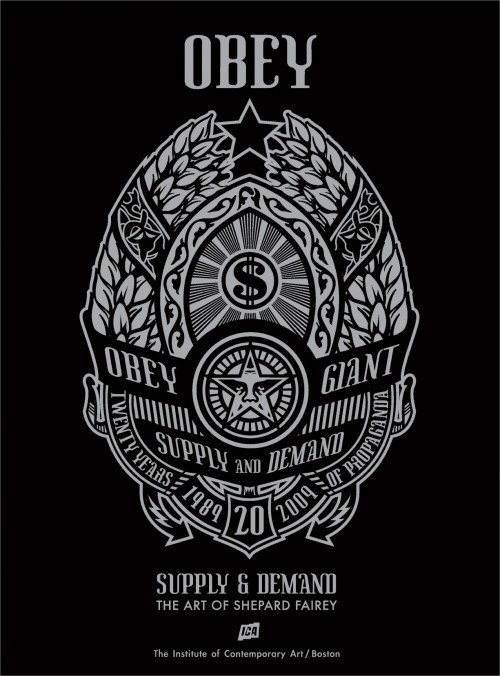