Graffiti artist Michael (Iz the Wiz) Martin, a legendary figure who painted scores of subway trains during a prolific career, has died of an apparent heart attack, friends and blogs said yesterday. He was 49.

Known for his trademark “Iz” tag, Martin grew up in Queens and was a prominent figure among old-school graffiti artists and the hip-hop pioneers who hung out with them.
Just last week, he appeared at a Bronx art gallery where he painted lifesize replicas of subway cars for fans.

His career began in 1972 and spanned decades before the city virtually eliminated graffiti with new subway cars and stepped-up security.

Martin moved to Florida as his health declined in recent years and he had trouble paying rent and health care expenses, friends said.

Martin once served as president of graffiti group The Master Blasters and the Queens division of Prisoners Of Graffiti.

Martin appeared in the documentary film “Style Wars” and portrayed a transit police detective in the film “Wild Style.”

His work has been displayed in museums and galleries throughout the world, including a 2001 exhibit at the Queens Museum of Art. 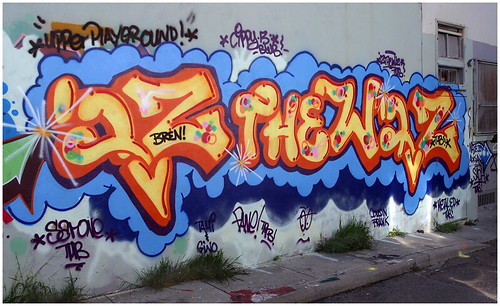