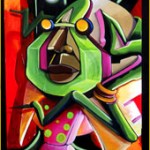 As an original member of the world famous FX CREW, one of the most recognized groups of international graffiti artists in the world, Pose has propelled his style and influence outside the stars and stripes of the United States. Amsterdam, Belgium, Paris and Japan have all been blessed with murals and exhibitions from this deep brother. A “prophet of self-education”, he describes his mission as, “to change the negative point of view held by critics who lack any real insight about graffiti and the impact it has on the world.”

In 1976 he adopted the tag Pose II and graffiti art became the cornerstone of his style. Pose II presently co-owns and operates an art gallery “Living In Perfect Style” where international artists and designers are featured. He is part of the Philadelphia Mural Arts Program, which holds the record for the most murals painted in any city throughout the world, and organizes the annual B-Boy BBQ where hip hop is showcased in its purest form.