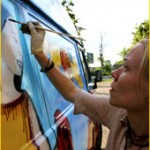 Europe-based female street artist fights the street battle for use of so-called public cultural spaces. Founder and member of The Laboratory of Living Arts since 1994, is an ex-member of the O.N.G (Ovejas Negras) Crew from Barcelona, Spain.

chooses her artistic subjects in direct relation to the location, conscientiously reflecting its social and cultural context. She may paint female boxers fighting dancing skeletons that are trying to spread greed and oppression, or little children going to school with books about revolution under their arms. In describing her work she has said it is, “about using the ruined down walls of the city creating murals to question the actual urban changes taking place… , from denouncing the ruthless speculation and the endless series of evictions… , to a more basic use of the great ‘public space’.”

More about her work can be found at: www.the-laboratory.org