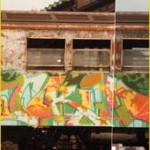 Tkid is one of the most influential Bronx, NY writers from the 1970’s to present. In 1966 when he was five years old, he stood with his mom on the Burnside Ave. southbound platform of the #4 train and saw kids writing on the inside of a layed-up train. His mother yanked his arm and yelled at him to stop looking at the ‘titeres’ (Spanish for hoodlums). At that moment the seed was planted.

Back in the day, you either joined gangs or got your ass kicked by ’em. That was a reality for Tkid. He started writing “King 13” in his local park because he was king of doing crazy tricks on the swings. When the Bronx Enchanters caught him writing his name on their turf, they took his marker, punched him in the face, and told him not to write his name on Watson Ave. ever again or they would kill him. So of course Tkid joined the gang and started to write his name all over their turf. He moved from gang to gang, changing his name each time, using Bro2, Wake5, Pearl, Dr Bad, Sen102, and R.H.

We interviewed Tkid in the park where he was inducted by the Bronx Enchanters, and the park where he was shot in 1977. It was after recovering from this gunshot wound that he came up with the name TKID 170 and made the decision to give up the gang life in order to devote his life to getting up and killing trains: whole cars, end-to-ends, window-downs, and top-to-bottoms.

In few years he became a master of style. Tkid is recognized by writers all over the world as having been one of the key developers of what is now known as Wild Style. Ironically, in order to make a stable living for his family, he also paints homeless shelters for the city of New York.

But Tkid is also one of the few old skool writers that keeps up with the times, constantly developing his style. He is currently a member of the MÖTUG collective (Monsters of the Unda – Ground) that includes Futura, Doze Green, Ces, Ghost, Ewok, Toofly, NYC Lase, Dizmology and Shepard Fairey.