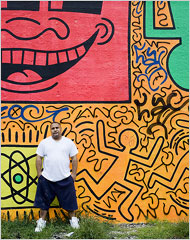 In the summer of 1982 the artist Keith Haring and his companion, Juan Dubose, painted a mural of Haring’s now signature figures, flanked by atoms and three-eyed smiling faces, on the remains of a handball court near Houston Street and the Bowery on the Lower East Side. Rendered in Day-Glo orange, neon green, yellow and hot pink, the work took about two days to finish. After only a few months Haring covered over the images, which had begun to fade.

Haring died of AIDS in 1990. To celebrate what would have been his 50th birthday, his mural was recreated by admirers in May on the original 50-foot-long free-standing slab of concrete.

The wall was meticulously prepared for repainting, its layers of graffiti scraped off to reveal traces of Haring’s work. This time the mural — commissioned by the Keith Haring Foundation; Goldman Properties; and Deitch Projects, the gallery representing Haring’s estate — cost close to $30,000 and took nearly 10 days just to paint.

The mural has now taken on a second new life. On July 22 a graffiti artist and onetime protégé of Haring’s seriously altered it by filling in the negative space with an intricate black interlocking pattern and spray-painting it with the repeated tag LA II.

“When I was painting that mural, I didn’t feel like it was me, I felt like it was Keith’s spirit in me,” said the artist, Angel Ortiz, 41, who is known by the tag LA II, which stands for Little Angel.

In 1980 Haring was 22 and an up-and-coming artist painting in a schoolyard on the Lower East Side when he was first approached by Mr. Ortiz, then 13. Mr. Ortiz had heard that Haring was impressed by his graffiti and that he was looking for him.

In a 1992 Haring biography by John Gruen, Haring recounts: “We just immediately hit it off. It’s as if we’d known each other all our lives. He’s like my little brother.”

Mr. Ortiz never worked on the 1982 mural, although he had tagged the wall before Haring and Mr. Dubose made their mark. As a nod to his friend, Haring left Mr. Ortiz’s tag untouched, and this spring it was even replicated by the hired team of professional painters.

After seeing the new mural, Mr. Ortiz, who has struggled with obscurity in recent years, decided that it was time to make himself known.

Julia Gruen, executive director of the Keith Haring Foundation, said Mr. Ortiz was “respectful” in his tagging, and treated the mural as if he had been collaborating.

Fred Brathwaite, better known as Fab 5 Freddy, said, “I think Keith would have loved it.” Mr. Brathwaite, who sometimes acted as Haring’s ambassador to the pioneering graffiti culture, added, “Back then Keith was looking for influences and inspiration, and he got a great deal of it from LA II’s work.”

The artist Kenny Sharf, who was a friend of Haring’s, said: “Keith treated him as a true collaborator; he didn’t treat him like some little kid, which he actually was, really. He respected him and gave him half of whatever they collaborated on.”

A flier from a 1982 exhibition at the Tony Shafrazi Gallery in New York features a photo of Haring and Mr. Ortiz posing in front of a backdrop of their energetic drawings.

But while Haring’s work grew in popularity, moving from subway graffiti to museum walls, Mr. Ortiz dropped out of high school in his junior year. After Haring died, Mr. Ortiz returned to his former life of the Lower East Side, his contributions by then largely ignored. In the early 1990s he became addicted to heroin and later served eight months in prison for possession.

The Keith Haring Foundation, which Haring established, also serves as his estate and provides grants to nonprofit organizations that assist children and AIDS-related causes. It has also transformed Haring’s art into what is essentially a brand, with merchandise from cookies to coat racks.

Mr. Ortiz contends that he has been denied credit and profits from the sale and licensing of artwork that he helped create.

Ms. Gruen said of the foundation, “We recognize his work and respect the history of his collaboration.” Mr. Ortiz, she said, “was compensated for all the work he did with Keith Haring in Keith Haring’s lifetime.”

As for the wall, she said, its future is under discussion. Mr. Ortiz said: “I don’t want to be rich and famous. What keeps me going is my art.” He added, “I wanted to show the foundation: This is LA II, this is how it all started.”