Biz Markie’s “Just A Friend” from 1989 echoed through Tats Cru’s South Bronx studio, where a hazy cloud of spray paint hung in the air. As the grafffiti artists worked on a mural, they’d stop, lean back to gauge their progress, and then lean in close to do fills and lines.

Now after years of doing walls, they are finally doing windows. Next month their graffiti paintings will be the backdrop to Lord & Taylor’s windows along Fifth Avenue, following in the footsteps of other artists like Red Grooms

and Larry Rivers whose work has appeared at the flagship store. 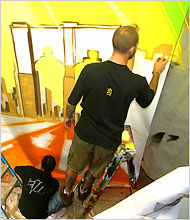 The crew is preparing the canvases for the 11 windows in their Hunts Point studio.

The music was from a time when the group’s work was a bit more renegade, bringing with it the adrenaline-rush risk of run-ins with the vandal squad. But the crew has long since become the city’s undisputed mural kings whose pieces grace buildings, buses, record covers, movie sets and even a Broadway stage.

“Getting our work on Fifth Avenue is like a gallery show for us,” said Hector Nazario, one of the group’s founding members whose nom-de-graf is Nicer. “How often do we get to put our work legally on Fifth Avenue? I mean, yo, we could have always put it there before. Whether it would have stayed or we got arrested is another question.”

The idea to enlist the South Bronx crew originated with several Lord and Taylor executives who have been scouting established and emerging artists as collaborators for their store windows. One of them knew of Tats through the ex-girlfriend of one of the muralists. In pretty short order, the go-ahead was given.

The crew is preparing the canvases for the 11 windows in their Hunts Point studio, before installing them and putting on the finishing touches at the store in early July. They are working off designs provided by the store – of cityscapes and skyscrapers – and adding their own touches and colors on canvases that are as large as 10 by 15 feet.

“Instead of DKNY on one building, we’ll put a big Tats, and the color’s will be more fun,” said Wilfredo Feleciano, known as Bio. “On one side they want us to do silhouettes. But instead of blond-looking women, we’ll have some with poofy Afros, more ethnic.”

He has only been by the store once, he said, stopping when he saw a crowd one December. “Oh wow,” he said. “They hooked up the windows for Christmas.” His colleague Nicer joked about how they still can’t afford to shop there. And for all the aerosol spray that envelops them when they work, they were surprised when they first entered the store. “Yo,” Nicer said. “Soon as you walk in they’re spraying perfume everywhere!”

Five members of the crew worked in the panels on Thursday, including Sotero “BG 183” Ortiz, and Raoul and David Perre, twin brothers from Germany known as How and Nosm. They were painting a Brooklyn Bridge scene where the arches were shaped like spray paint cans. “This bridge was built by a German,” said How. “This is my interpretation.”

Had he ever done windows before? “Yeah,” he joked. “We painted over them.”

Nicer climbed up a ladder, making up for lost time after missing a day for his son’s grammar school graduation. While he and his crew think they could have been paid more, the exposure was unbeatable. “It’s always good to be asked to do stuff outside of your normal circle,” he said.

But he has been doing this kind of work long enough not to be fazed by anything.

“One week we will be working at a mansion in Connecticut where the driveway was so long they had sheep on the grass, and the next week we’ll be painting at a bodega on Southern Boulevard,” he said. “There is such a huge contrast, it doesn’t even surprise us anymore.”

“When we were at this mansion, they had a horse barn,” he said. “This woman told us ‘That’s where the horse sleeps, but he’s at camp.’ At camp, yo! The horse was at camp.”

As Nicer recounted their job painting a van at the mansion, How stopped for a break. Like the others, he has in the past put his tag on trains and walls while evading police officers. And while he may be legit now, his smile when he talks about outsmarting one particular officer betrays a wilder side. When the officer retired from the force, he celebrated by painting a train.

“They asked us at the store if we were excited about the windows,” How said. He shrugged. “After trains, what’s exciting?”

One Response to Tats Cru does 5th Ave.