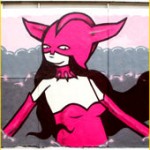 Kid Acne was born in Malawi in 1978, grew up in England and is currently based in Sheffield. He began writing graffiti at the age of twelve and has gone on to design record sleeves, skateboards, bar interiors and ladies knit wear, having created illustrations for clients such as Levis, Prada, Warp Records, the Designers Republic and XL Recordings.

2001 saw the release of his collaborative comic project, Zebra Face; detailing the adventures of useless super-hero with only the head of a zebra and a diabetic sidekick to help him battle a host of baddies in a 2D universe.

His graffiti and illustrations feature mythological characters, amazonian warrior goddeses and wild animals in a style which he calls ‘Blood & Sand’. He has exhibited in galleries throughout the world and is currently dividing his time between creating new artworks and recording his 3rd solo album for London’s Lex Records, due for release late 2006.